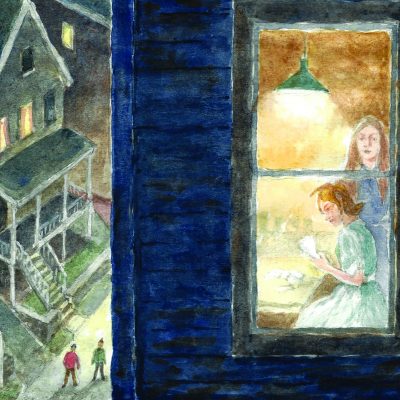 Robert received his art education at the New York Phoenix School of Design, graduating in 1960. The school has since been incorporated into Pratt Institute. He then served with the U. S. Army’s 10th Special Forces Group in Europe from 1961 to 1964.

He works in several themes.  His Finktown Series, which depicts scenes of growing up in a colorful Peekskill neighborhood, is ongoing and has become a kind of documentary of a period in American history.  Another theme is Metamorphosis, a surrealistic juxtaposition of slick commercialism and the natural world.  Plein Air painting is inherent to watercolor and it has taken Robert to locations from the Hudson Highlands to Europe, Alaska and Labrador.

Robert has had one-man shows at The Peekskill Museum in l982 and 2008, Museum of the Hudson Highlands in l983, Zum Pulverwirt in Bad Tolz, Germany in 2002, Locust Grove National Historic Site in 2007, Hudson Valley Hospital Center in 2013, Chappaqua Library in 2013 and the Mahopac Library in 2019.  His work has been exhibited at Silvermine in Connecticut, The Katonah Arts Center, The Tolzer Art Exhibit in Bad Tolz, Germany and the Cunneen-Hackett Gallery in Poughkeepsie and the Painting Center in New York City.  Peekskill representation includes The Paramount Center for the Arts, Westchester Community College, The Flatiron Gallery, and the Hudson Valley Museum for Contemporary Art.