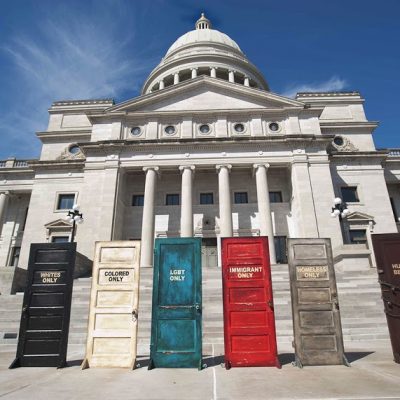 The End Hate Door Installation was created in response to Arkansas’s HB1228 which made it out of committee in March of 2015. This discriminatory bill would have brought back Jim Crow days where hatred and repression were the law of the land. The installation was installed twice on the steps of the Arkansas State Capitol as a First Amendment protest of the reckless and unjust behavior by the 90th General Assembly. Through social media, Yahoo News and the Associated Press, the doors went viral overnight and were seen as far as South Korea and India.

The Installation made the New York Times ‘The Most Important Moments in Art in 2020,’ through SaveArtSpace and Art At A Time Like This, were published in numerous international art magazines, and have shown at venues such as the Virginia Holocaust Museum, Richmond, VA, The Rosa Parks Museum, Montgomery, AL coinciding with the National Memorial for Peace and Justice Memorial, The LGBT Center in New York, the Delta Cultural Center 100-Year Anniversary of the Elaine Massacre Memorial Dedication, and many others.